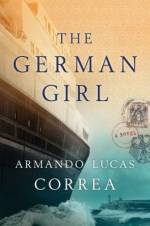 I highly recommend The German Girl (2016). It is the fascinating story of two very different girls growing up in different times. In 1939, Hannah Rosenthal is wealthy and originally from Berlin. In 2014, Anna is from New York.

Hannah's story features her and her parents' escape from Germany before the war begins. She is not of "pure" German blood and they escape by securing passage on a luxury transatlantic ocean liner, called the St. Louis. Her family plans to make a new life for themselves in Havana, Cuba.

Anna receives a birthday gift from a mysterious unknown relative, her Great Aunt Hannah, in Cuba. So Anna and her mother travel to Cuba to meet this relative and find out the truth of her past.

Author Armando Lucas Correa weaves the two stories together so well that I could not put the book down. It is inspired by the true story of the passengers of the St. Louis and what became of them during the Holocaust. (Spoiler alert: read the article from the United State Holocaust Memorial Museum—but not if you want to be surprised by the book).

The German Girl is available to read or listen to via Overdrive. Check it out today. Visit our website for a list of World War II Novels.

You Were Always Mine

World War Z: An Oral History of the Zombie War by Max Brooks (2006)

By accepting you will be accessing a service provided by a third-party external to https://ippl.info/