Explore the colorful and magical world of Mary Blair in this junior biography told with beautiful pictures. While we can now find Blair listed among top Disney artists, animators, and designers, we get to see how her childhood love of colors and sketching led to that future working with Walt Disney himself. It is not an easy journey, trying to compete with men as well as color cynics (perhaps somewhat surprising for the world of Disney we know today). Ultimately, though, Blair receives an invitation to help create arguably the most recognizable and nostalgic theme park ride of all time—and my personal favorite—It's a Small World, truly epitomizing Blair's talent and vibrant imagination.

Check out Pocket Full of Colors: The Magical World of Mary Blair, Disney Artist Extraordinaire (2017) by Amy Guglielmo and Jacqueline Tourville. For more information, visit Oh My Disney for The World Behind "It's a Small World" and The Life and Work of Mary Blair.

​Disney+ has finally arrived!  Based on cast alone, my first viewing selection was Noelle (2019, G) which was originally intended for theatrical release, but was later reserved for the launch of Disney+.  It stars Anna Kendrick and Bill Hader as Kris Kringle's kids, Noelle and Nick.  Also in the cast are long-time actors Shirley MacLaine and Julie Hagerty, with comedians, Billy Eichner and Ron Funches.

Nick has trained his whole life to take over for his father as Santa, but as the pressure builds, he takes a vacation on his sister's recommendation.  Unfortunately, Nick took that to mean a one-way trip to the southwest.  Noelle has to venture out from the North Pole to find him, all while learning that Christmas is more meaningful when you focus on giving instead of getting.

Overall, this light-hearted film, albeit slightly predictable, will bring laughter and maybe even some tears to you and your family.  Find other Christmas movies to watch with the family on our website.

View Noelle and everything else Disney you can imagine with a Roku featuring Disney+. 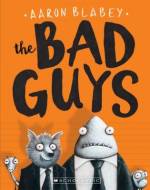 I read this book in one sitting with a three year old: I'd call that an accomplishment and give a lot of that credit to author Aaron Blabey. We follow Mr. Wolf and his associates, Mr. Snake, Mr. Piranha, and Mr. Shark, on a mission to turn around their longtime reputations as bad guys. They hit just a couple bumps along the way, but are determined to make amends.

This early chapter book is part of a series, so get caught up in Blabey's sketchy characters' silly escapades. The Bad Guys (2017) is a 2020 Monarch Award nominee, recommended for grades 2-4.

​If you are a devoted Disney fan like me, you may be reluctant about the company's recent foray into live-action remakes of their classic animated movies.  In this 2019 live-action version of Aladdin (rated PG), I went in with low expectations, especially for Will Smith in the role of Genie, because Robin Williams' performance as the 1992 animated Genie was so outstanding.  Smith ultimately does not try to mimic Williams' style and interpretation, but rather adds his own flair to the part.  Genie even gets an expanded storyline in the live-action.  I also appreciated that Jasmine was a more developed character, expressing a desire to break down the oppression of her society and voice her opinions as a leader.

Composer and songwriter Alan Menken returns to score the live-action film, enhancing his original music and adding additional songs not part of the 1992 version.  So perhaps Disney can, in fact, be successful in livening up their animated classics after all!

Be sure to check out the soundtrack as well on CD or via Hoopla.

Are You Scared, Darth Vader?

Fellow parents and Star Wars fans, this is sure to please! Adam Rex writes this book in a conversational style, so I highly encourage reading in your best Darth Vader voice for an extra fun experience. Parents (and Star Wars buff kiddos) will appreciate nods to the movies and characters throughout.

All in all, Are You Scared, Darth Vader? (2019) is a hilarious book with a special twist ending. So, are you ready to find out if there is actually something frightening enough to scare Darth Vader?

Check out this book in print or digitally via Hoopla.

Are you already a follower of Montessori principles, or are you curious to find out what it's all about? In The Montessori Toddler: A Parent's Guide to Raising a Curious and Responsible Human Being (2019), Simone Davies, a parent and Montessori teacher, gives background on the Montessori philosophies that you can apply at home. Even if you aren't ready to adopt the whole lifestyle and education, you'll find great information about toddlers and their development, as well as activity guides and resources to encourage creativity, cooperation, and responsibility.

Miles Morales, a New York teen just starting out at a new school finds himself bitten by (yes) a radioactive spider...but this isn't your typical Spider-Man origin story.  From there the Spider-verses collide and an eclectic cast of characters comes together from multiple realities.  Readers of the comics will definitely appreciate this merge, but all can enjoy the superhero action and sparks of humor we are used to throughout most of the Marvel Universe.  So join Miles as he learns to have confidence in himself and figures out his Spidey senses to save not only his dimension but also everyone else's!

Spider-Man: Into the Spider-Verse won the Academy Award for Best Animated Feature Film.  Did you miss Jez's review of this Oscar winner? Check it out!

Do you have kids in your family who love LEGOs?  Are you, yourself an AFOL (Adult Fan of LEGOs)?  This Netflix documentary follows the creative development and build process of LEGO House in Denmark, also tying in some of the LEGO company's history.  LEGO House was designed to offer visitors a LEGO experience like no other.  After watching, you'll definitely want to add Billund, Denmark to your travel bucket list!

This documentary is available on Netflix via the library's Roku devices.

Children of the 80s and 90s, this show is especially for you!  Full of nostalgia, fun facts, and original commercials, this 8-part (so far) documentary series details iconic toy brands including Star Wars, Barbie, Transformers, and more.  Even though each episode features one brand, my favorite part was seeing the connections between brands throughout the series.  Relive your childhood through The Toys That Made Us, available on Netflix via the library's Roku devices.

Trevor Noah has a gift for storytelling (which makes it no surprise that he is now a comedian). I would have liked this book more if it were told in chronological order, but ultimately, I assume the order in which it is presented goes back to the fact that he's a comedian and likely thinks anecdotally vs. chronologically. That said, Noah tells such fascinating stories of his childhood, teen years, and young adult life, all while intertwining the cultural setting of South Africa while he was growing up. I highly recommend the audio to fully appreciate both the variety of languages Noah references and the emotion and humor in his storytelling.

Check out Born a Crime: Stories from a South African Childhood and other titles on this year's 2019 Lincoln Award (PDF): Illinois Teen Readers' Choice nominee list.

The September 11 terrorist attacks are one of those significant moments in history where you remember where you were and what you were doing when it happened. This novel is told from two teen girls' perspectives, fifteen years apart: Alia in 2001 and Jesse in 2016. Alia, a Muslim, going to the North Tower to see her father when the plane hit, and Jesse, whose older brother somehow ended up at the Twin Towers that day and lost his life, significantly altering her family in the process.

The two stories eventually intertwine, and if you are like me, All We Have Left will have you on the edge of your seat as piece by piece you learn how Alia's and Jesse's experiences are connected. All We Have Left by Wendy Mills is a nominee for the 2019 Lincoln Award (PDF), the Illinois teen readers' choice award.

Atypical revolves around high school senior, Sam Gardner.  He loves penguins, art, and biology and just happens to be on the autism spectrum.  Follow the Gardner family as they navigate relationships at school and home, while Sam works to gain more independence and life experience in this witty, yet heart-tugging Netflix original series.  Seasons 1 and 2 are available to stream through Netflix on our Rokus.

Girl, Wash Your Face: Stop Believing the Lies About Who You Are so You Can Become Who You Were Meant to Be by Rachel Hollis (2018)

Have you ever told yourself a lie and believed it? Maybe that you're not good enough, don't know how to be a mom, or should be further along by now in reaching your goals? In her most recent book, Girl, Wash Your Face, Rachel Hollis opens each chapter with a lie she once believed about herself, telling personal stories and sharing what helped her overcome those lies. Covering a wide variety of topics from relationships to parenting to careers and more, Hollis' life experiences will touch women in all different walks of life.

Hollis reads the audio version (available on CD or downloadable on hoopla and eMediaLibrary), which I highly recommend!

In this real-life Wonder story, Robert Hoge describes his early life being born with not only a large tumor on his face affecting the placement of his facial features, but also legs which were underdeveloped. While he addresses some of the surgeries he underwent as baby up through high school, this autobiography centers around his family life and his determined spirit, despite challenges with his physical appearance and abilities along the way. I highly suggest the audiobook, read by the author himself.

Check out Ugly and other titles on this year's 2019 Bluestem nominee list targeted for grades 3-5.

Helen Frost tells the story of 12-year-old Diamond Willow, named after diamond willow sticks, which when carved and polished, have beautiful diamond-shaped designs. These designs are the forms that Frost's poems take in the book, each containing a hidden message.

Willow struggles interacting with other humans; however, she loves dogs and has a special connection with her family's favorite sled dog, Roxy. While attempting to save Roxy's life, an unexpected snowstorm ends up landing Willow in a harrowing predicament. Ultimately, though, this adventure leads to the reveal of a family secret kept hidden Willow's entire life.

A quick read and a creative format, Diamond Willow is on the Bluestem nominee list for 2019 for grades 3-5.
Tags:
fiction kids
Tweet
Previous     Next
1 2 3