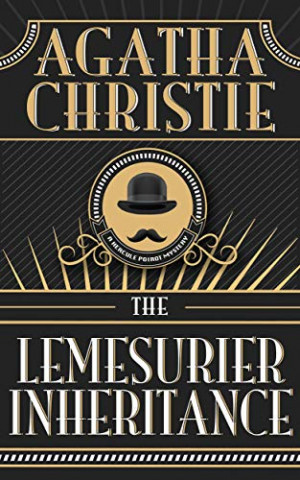 A medieval ancestor of Hugo Lemesurier killed his wife and child. Her dying words put a curse on the family. No first-born son will be allowed to inherit the substantial Lemesurier estate. The curse proves lethal over the centuries.

Fast forward to the twentieth century: Hugo's frantic wife calls in Poirot and Hastings to investigate suspicious accidents happening to eight-year-old Ronald, Hugo's first-born son and next in line for the inheritance. Since this is Agatha Christie, there's a surprise at the end.

This little-known Poirot short story is read by Charles Armstrong. He's the British voice of narrator Hastings. He then switches to the French accent and delivery I've come to expect from Poirot.

The Lemesurier Inheritance (1923) takes twenty-two minutes to hear: perfect for when you need a quick interesting mystery. Visit Hoopla to listen to the audiobook or read the ebook—plus discover the rest of Hercule Poirot's adventures.

The Adventures of Sherlock Holmes by Arthur Conan Doyle (1892)

Arthur Conan Doyle’s unique mysteries are cleverly written and entertaining. The Adventures of Sherlock Holmes (comprised of twelve short stories) was a tremendous re-read for me.

For similar titles, check out our list of Classic Tales of Mystery & Suspense.

Tenth of December by George Saunders (2012) I don’t usually read short stories, but Tenth of December by George Saunders got such excellent reviews, I had to see for myself. I was not disappointed – Saunders is a master with language, creating scenarios where authority figures of one kind or another seek to control, either overtly or covertly, the emotions and responses of various characters including high school students, a recently returned veteran, a dying man, and an ill-fated family.

Despite the often dark subjects that include mind control, abduction, objectification, and simmering violence, Saunders’ stories also contain elements of absurdist humor and love and he manages to suggest that there is hope for humanity despite it all.

Visit from the Goon Squad by Jennifer Egan

Visit from the Goon Squad by Jennifer Egan (2010)
This Pulitzer Prize winning book is more of a collection of short stories than a novel with each chapter focusing on a particular time in a character’s life. Written in a non linear format the book spans from the 1970s punk rock scene to the distant future of 2020.  The American music scene is the focus for the diverse cast of characters that includes Sasha, a troubled young kleptomaniac and Bennie, an aging music producer. Throughout the book, the characters’ lives intersect each other and in the end everyone is connected to one another to some degree. Egan’s unique writing style allows the reader to see the characters at different points  in their lives and understand how time has changed them.

This is an intriguing and engaging novel that explores memory and the passing of time in our lives.

Check out this candid interview with the author about her book.
Tags:
fiction short stories
Tweet

Tabloid Dreams by Robert Olen Butler (1996)Tabloid Dreams provides refreshing tales of ordinary people in their ordinary lives when the quirky and unusual comes knocking at the door. I’d recommend this for anyone who wants something a little different from the rest.

Read an excerpt from “The Remedy Man” at Random House’s website. See what the reviews say at Amazon.com.
Tags:
fiction short stories
Tweet

Livability by Jon Raymond (2009)
This short story collection is set in and around Portland, Oregon, and follows characters at transition points in life. Two of the nine stories have been adapted into independent feature films directed by Kelly Reichardt.

Listen to the author read from Livability and check out the Amazon.com reviews.
Tags:
fiction literary fiction short stories
Tweet

The Blue Religion edited by Michael Connelly (2008)
Mystery fans will love this collection of short stories put together by the Mystery Writers of America. It features crime/mystery stories presented by 19 different authors, designed to keep you up reading into the wee hours of the morning. A great addition to the collection!

The Day I Ate Whatever I Wanted by Elizabeth Berg

The Day I Ate Whatever I Wanted and Other Small Acts of Liberation by Elizabeth Berg (2008)
This collection of short stories deals with women taking chances at all stage of their lives. Some of the stories will have you howling with laughter; others will bring you to tears, but all feature characters and writing that will find a place in your heart.

Today's the day! Call the Downers Grove Public Library at 630-960-1200 to reserve your tickets for An Evening with Elizabeth Berg on Thursday, May 8. Listen to the author talk about her inspiration for Dream When You're Feeling Blue, the research, and the response. Berg will read an excerpt, answer questions, and sign books.
Tags:
fiction short stories women's fiction
Tweet
1